Skip to main content
⭐️ If you like KubeVela, give it a star on GitHub!⭐️
KubeVela v1.7.0 is now available.(2023-01-13) Read Release Note
This is documentation for KubeVela v1.6, which is no longer actively maintained.
For up-to-date documentation, see the latest version (v1.7).
Version: v1.6

KubeVela introduces Authentication & Authorization for application delivery and management from v1.4. This article will deep dives in the underlying mechanism and demonstrates how it works.

This underlying mechanism mainly focuses on the KubeVela application. VelaUX builds additional authentication and authorization layer on top of it.

This article discusses the KubeVela Authentication & Authorization in a relatively wide range, including the design, implementation and advanced usage. Reading through all of them and comprehend the materials are not required to use it.

To fully understand the working mechanism of KubeVela Authentication and Authorization, learning basic Kubernetes concepts would be helpful.

KubeVela mainly works on two types of identity, one is the User/Groups and the other one is the ServiceAccount.

Usually, User/Groups information are embedded in the X.509 Certificates, where CN (Common Name) and O (Organization) in the Certificate indicate User and Groups respectively.

On the other hand, ServiceAccount is usually indicated by the Bearer Token of your KubeConfig, different from the X.509 Certificate. The ServiceAccount identity requires a real entity in Kubernetes cluster while User/Groups do not need that.

For the most time, when you setup your own Kubernetes cluster through either tools like KinD/Minikube/K3s or cloud providers like EKS(Amazon) / ACK (Alibaba) / GKE (Google), you will get a KubeConfig based on X.509 Certificate which embeds User/Groups like system:admin, kuberetes-amdin, system:users, system:masters, etc. They will be bound to the cluster-admin ClusterRole which gives you the full privileges to manage your Kubernetes cluster.

The access control for identity in KubeVela application is totally based on the native Kubernetes RBAC (Role-Based Access Control) mechanism. That means the RoleBinding/ClusterRoleBinding entities define what the identities can & cannot do. You could use either native ways such as using kubectl to apply YAML files or using Vela CLI to bind pre-defined privileges to identities.

No matter which way you use, the source of truth is always the Kubernetes objects, including Roles, RoleBindings, ClusterRoles and ClusterRoleBindings, depending on the scope of the privileges. KubeVela does not introduce any additional privilege objects. So there is no consistency problem between KubeVela and the backing Kubernetes.

In KubeVela, Vela CLI provides a series of convenient commands to help you manage these identities and their privileges.

If you ever tried to generate your own KubeConfig using OpenSSL or based on existing ServiceAccount, you will find the process is a bit complex and hard to remember. You can write shell scripts to automate the process but if you do not have that script yet, you can try the Vela CLI commands.

For the X.509 based KubeConfig, the command will generate a pair of RSA Public Key and Private Key first, and create a CSR (CertificateSigningRequest) in the Kubernetes. The CSR carries a subject that uses the Kubernetes User as the Common Name and the Kubernetes Groups as the Organizations. After the CSR is created, the Vela CLI command will approve it automatically and the signed certificate in the CSR will then be extracted into the newly generated KubeConfig. Finally, you will get a new KubeConfig that will be properly recognized by your Kubernetes.

KubeVela recommends you to use the User/Groups based KubeConfig, since this method will not bother you creating or recycling ServiceAccount objects.

In Kubernetes, if you want to know the privileges somebody has, you need to go through the RoleBindings/ClusterRoleBindings and find out all Roles/ClusterRoles that bound to it. Then you need to check all these role objects and see the privileges inside. This laborious process is more painful in KubeVela, since KubeVela supports multi-clusters which means the same work has to be done repeatedly.

Fortunately for KubeVela users, to alleviate the burden of looping over all the related role/rolebinding objects, Vela CLI provides vela auth list-privileges command to help you inspect privileges across multi-clusters. All you need is to give --cluster args. With this command, you can not only check the privileges of a single User or ServiceAccount, it is also possible to detect the identity in your KubeConfig and show the related privileges to the KubeConfig as well.

The Vela CLI command will display the roles/rolebindings in the tree format, which provides a direct and transparent view for all the privileges the target identity has.

One of the most common way for system operators to manage users is to divide the cluster resources by namespaces and assign users to their namespaces. To achieve that, system operators usually create a namespace first, and then create roles and rolebindings in the namespace for the target user. For multi-cluster scenario, this operation also need to be repeated several times. With vela auth grant-privileges, you can automate these operations in multi-clusters and use only one single command to grant all required privileges.

The grant-privileges command will first check the existence of the target namespace. The namespace will be created if not exists and --create-namespace flag is used. Then it will create a ClusterRole that allows user to do Read/Write actions to any resources in that namespace. The target identity will be bound to that ClusterRole through a RoleBinding or ClusterRoleBinding, depending on which scope would like to be granted. Finally, the whole process will be repeated in all the specified clusters.

Sometimes, you might want to grant readonly access to user. In this case, you need to use the --readonly flag.

Notice that Vela CLI only provides coarse-grained privileges management. If you would like to manage fine-grained privileges such as grant specific resource privileges, you can refer to the native Kubernetes RBAC managements. KubeVela also provides vela kube apply --cluster command to help you propagate your YAML object files into multi-clusters.

Vela CLI does not provide commands for revoking privileges by now. If you need to revoke privileges, you can edit the corresponding RoleBindings/ClusterRoleBindings and remove the bound identity from them. If you just want to delete those bindings, you could use vela kube delete --cluster to delete in multi-clusters quickly.

Diving into the Application​

When Application Authentication is enabled in KubeVela, applications will not use KubeVela Controller's privileges to dispatch resources anymore. Instead, it will use the privileges of the identity who lastly created or modified it. It will prevent users to escalate their privileges through creating applications that manage resources outside their own privileges.

The whole implementation process is based on the Kubernetes impersonation mechanism.

Theoretically, if the user has the privileges to impersonate as other users, it could create applications through kubectl apply --as=other-user. The identity will first be handled by the kube-apiserver, where impersonation will be handled. Then the application webhook will receive the impersonated request from the kube-apiserver as the user other-user. At this time, the application will be bound to other-user instead of the original one. This can be useful when admin users want to debug/test as other users.

When handling resources, KubeVela controller will send requests with impersonation header targeting at the bound identity, which means the kube-apiserver will process those resource requests using the impersonated identity. As for the single cluster scenario, the request will be handled properly by now.

For the multi-cluster scenario, the process is more complex. After the request is impersonated in the kube-apiserver of the control plane, it will be redirected to the cluster-gateway service.

The whole process is shown in the following figure in detail.

In detail, for different operations of KubeVela application controller, some are impersonated and some are not. For example, the privileges such as accessing all the ResourceTrackers can be overlarge for ordinary users to have, so usually we do not give that privilege to users and keep this privilege to be limited for the controller. Below is a list of operations and whether they are impersonated.

The multi-cluster application impersonation in KubeVela relies on the ClientIdentityPeneration in ClusterGateway. With this feature, ClusterGateway will always extract the identity from the incoming request and put it in the impersonation header on the request that is redirected to the managed cluster.

This can not only help KubeVela application to reuse the same identity across clusters, but also prevents any unauthorizationed access to managed clusters through ClusterGateway and secures the managed cluster access on the control plane.

However, there are limitations for this feature that identity used across multi-clusters must be consistent. For example, you cannot let the KubeVela application to act as alice in the cluster-1 but act as bob in cluster-2. That will require identity exchange or projection, which is supported in neither ClusterGateway nor KubeVela controller by now.

By default, KubeVela does not pass all the identity information to the impersonation header. You can control it through controller's bootstrap parameters, or helm values.

In brief, if you have the lowest requirements to the transparency of your identity information (for example the hub cluster and managed clusters are operated by the same team), you can set --authentication-with-user=true and --authentication-group-pattern=*. The default configuration uses the most secure and opaque options.

Some resources in KubeVela are data sensitive. For example, the ResourceTracker object in KubeVela records all the objects that are dispatched in the application. The secrets that records the managed clusters contain the credential information for accessing. Usually, the system operator may not want to expose all these information to ordinary users.

vela-prism is a project that aims to solve this problem. You can install it by following the installation guide in the repo. 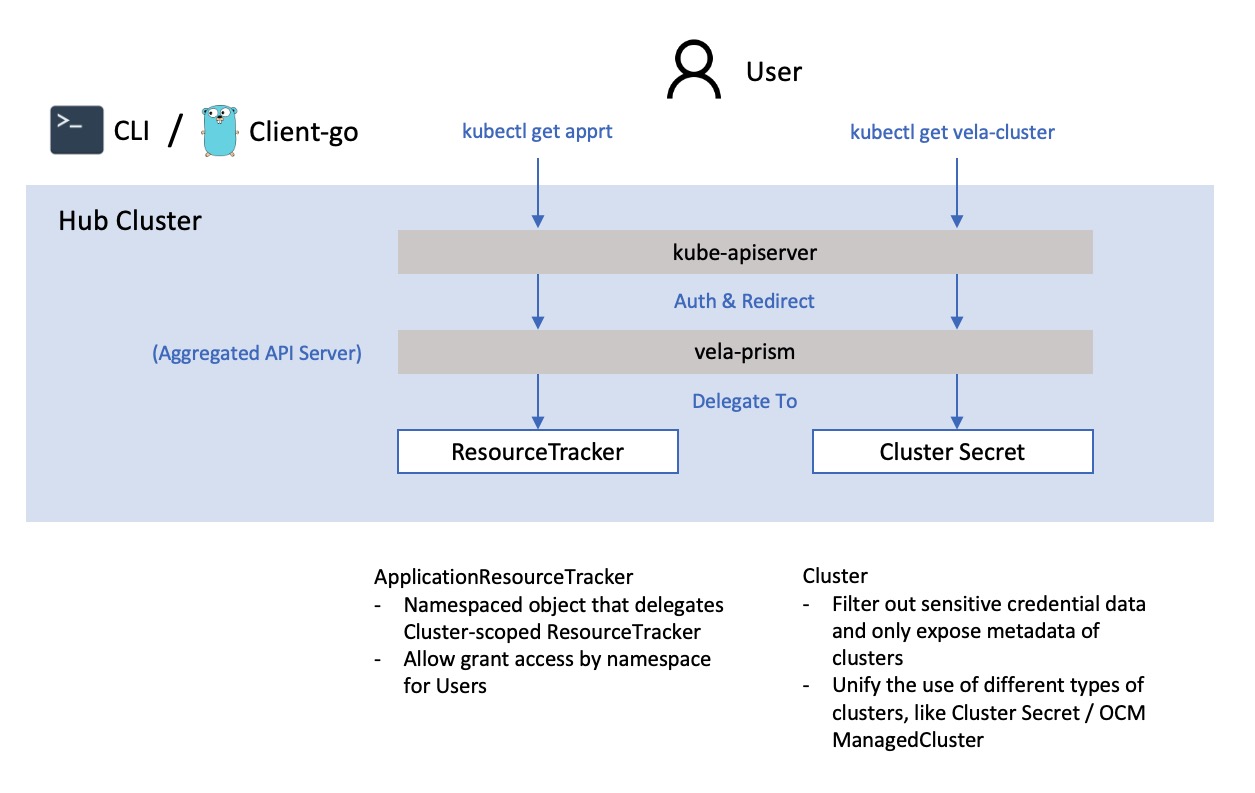 The original ResourceTracker in KubeVela is a cluster-scoped resource which records all the applied resources of the application and tracks them during application updating and recycling.

Allowing user to access cluster-scoped ResourceTrackers can be dangerous, since users will have privileges to read objects dispatched by other users' applications. The ApplicationResourceTracker, served by vela-prism, provides a namespaced-scoped access to the ResourceTracker object, which means access can be restricted by namespaces. One of the benefit of using vela-prism is that you could run vela status <appname> -n <namespace> --tree --detail to see the details of applied resources, even with limited privileges.

The vela-cluster object similarly provides an alternative access to the cluster secret. It removed the sensitive credential fields which allows users to see what managed clusters are joined, without knowing the credentials to access them. You can run kubectl get clusters after installing vela-prism, you could get all the joined clusters the same as vela cluster list (which needs the privileges of accessing cluster secret directly).

The overall design of the KubeVela's authentication & authorization in controllers follows the principles of reusing and being coherent to the native Kubernetes mechanism. KubeVela do not do extra authentication by itself since that will increase the learning burden of KubeVela users. Instead, by leveraing the impersonation mechanism, KubeVela controller defers the admission check to Kubernetes api-server, and so does the cluster-gateway.

The authentication & authorization in VelaUX, on the other hand, focus more on the admission checks of upper layer entities, like Projects or Targets. It reuses the underlying admission check for Applications and their resources.